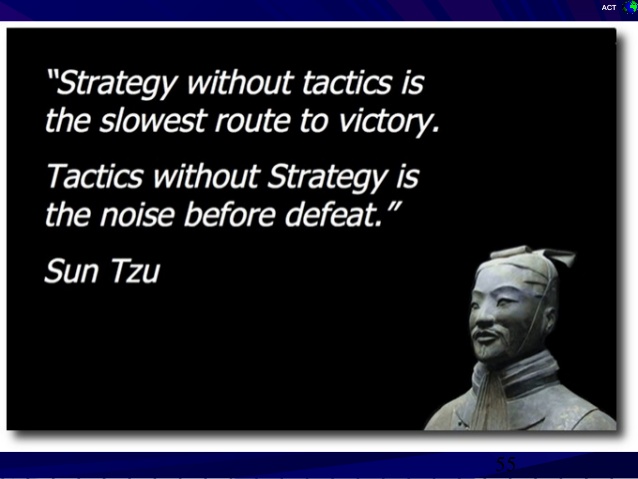 I will come to no surprise to most of you that I am a sports fan. While the sheer acts of athleticism displayed on the playing field are indeed amazing to watch, it’s the strategy of the coaches that draws me to sport. I am not talking simply about the game planning; what many call, “the Xs and Os”. The individual game time tactics are important, sure. But it is the long term, vision-based teamwide strategy that make those tactics effective. Successful organizations know this and live it. Here’s a case in point; a lesson learned from watching football.

I was listening to sports radio on my commute to the pool the other day. The Jacksonville Jaguars had defeated the favored Pittsburgh Steelers in a hard fought contest the day before. I heard one of the Jaguar players belittle the upcoming game against the defending champion Patriots. His emotions were undeniably high. He did his fair share of trash talk and went on to proclaim that his team was going to the Superbowl in dramatic fashion.

Let’s contrast that with what I heard out of the mouths of some of the defending champions as they prepared for the upcoming game against the Jaguars.

The next day, I heard some Patriot players discussing the upcoming Conference Championship game against the Jaguars on the radio. The New England players spoke with a true focus on the task at hand. They said they watched film of their opponents and were impressed with their talent and abilities. They used phrases such as, “...the toughest opponents will have faced all season” and “...we will have to have our A game in all phases of the contest”.

No Drama. No Swag. No Hyperbole. These were experienced champion athletes staying focused on what they needed to do individually to meet their team goal.

Would I love to see a Florida underdog team upset the perennial favorites? Of course. That said, you have to give credit to an organization and leader who have designed and implemented winning strategies for over a decade. Consistent winners win because they have an effective plan and are willing to prepare themselves at an optimum level to implement that plan; day in and day out.

Which brings me, of course, to swimming.

I have been around this sport since 1969. I have been fortunate to experience it successfully from almost every angle. Athlete, assistant coach, senior coach, college coach, parent and the head of some very large and successful programs. Those experiences have given me a unique three hundred and sixty degree perspective of the sport. It is armed with those experiences, and the knowledge gleaned from them, that has allowed me to formulate Blue Wave’s long term strategy.

I felt compelled to write about strategy after witnessing a combination of events that transpired over the past few days. Each on its own was great. When combined, they showed me that we have come a long way as an organization in a relatively short period of time.

The first was how the coaches and athletes dealt with sub par conditions at last weekend’s meet in Fort Myers. There was an obstacle, we worked around it and did the best we could. No drama. Way to go. Control the controllables and do whatever you can to make the best of less than stellar conditions. That is a crucial component of Championship Behavior.

The second event was more of an observation then an event. We have a lot of swimmers participating in the program. It’s one thing to see the swimmer totals on a spreadsheet. It is quite another to see full pools. These are healthy numbers. The lanes are not too crowded, but have enough athletes in them to support larger club goals.

The final reason I felt compelled to write today was how the swimmers are approaching their training. If you have been on deck this week you could not have helped but notice a distinct change in the quality of the effort of the swimmers as a whole. They, like the championship football players mentioned earlier, are focused on the task at hand.

There is a certain sound to quality workouts; a churning symphony that has a distinct rhythm and flow to it. I heard that sound at both the senior and age group practices this week. There is less noise, i.e., requests to use the restroom or to change the workout by individuals. It’s a synergetic hum. It’s the sound that is heard before large scale organizational success in our sport.

Rome wasn’t built in a day. Large, successful swim clubs take time to develop. The great workouts that are transpiring now are a direct result of what we did leading up to this point. Tomorrow’s successes will be a result of our continued growth and adherence to our vision, mission and strategy. It’s nice to step back and report that I feel we are on the right path. Let’s stay focused, have fun and expect success. The coaches on both sides on the bay appreciate your continued support.

See you at the pool - Rich