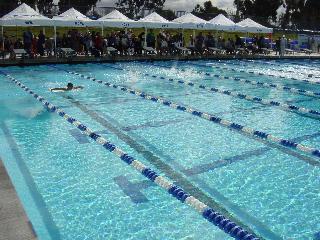 “We all experience doubts and fears as we approach new challenges. The fear diminishes with the confidence that comes from experience and faith. Sometimes you just have to go for it and see what happens. Jumping into the battle does not guarantee victory, but being afraid to try guarantees defeat.”
-- Brian Goodell, 1976 Olympic gold medalist

Brian Goodell was known for his mental toughness and tremendous work ethic. At the 1976 Montreal Olympic Games, no event was more emotionally and physically draining for him than the 1500m free. But Goodell was up for the challenge.

Then a feisty American teenager, Goodell had already set world records in the 400 and 1500m free at the 1976 Olympic Trials and was brimming with confidence. But the Olympics was a different arena, and Australian rival Steve Holland was the race favorite.

As the race unfolded, Goodell was in obvious pain at the 1000-meter mark.  He was trailing U.S. teammate Bobby Hackett and Holland by a full body length and appeared destined to finish third. But the tireless worker who did extreme long distance training (six hours a day and 120,000 yards a week) found another gear and machete-like stroke for the last 500 meters. His ability to withstand pain was never more evident.

As the three swimmers charged down the 28th length of the race, the crowd was on its feet. No matter what the outcome, this was both the fastest and the closest 1500 race anyone had ever witnessed at the Olympic Games. “I talked to myself during the 1500,” Goodell said. “First the negative side of me would talk. It would say ‘You’re too far behind,’ then it would make excuses. Then the positive side would come on and say, ‘Get your head together and get going.’  “Mental preparation is as important as physical preparation in this race.”

When all three swimmers touched the pad, Goodell became the fastest distance swimmer in the world and in history, at 15:02.40. Goodell’s final 100m time was an incredible 57.73, which would have been good enough to win the national 100m championship 25 years before. Hackett finished second, and Holland third; both had also broken the former world record. “For the first few seconds (after I touched), I didn’t feel anything,” Goodell said. “Just, ‘wow, it’s over. Then I saw I won and set the world record, and all of a sudden I was really happy. Winning was a confidence-booster for me in the 400 because I knew I was ready.

“I went back to my room and lied there awake just grinning. My face probably hurt the next day from just lying there all night like that.”

Goodell was just as mentally strong in his other race, the 400m free, where he and U.S. teammate Tim Shaw battled for the gold. Goodell held on to win over Shaw, his longtime high school and AAU rival, but both broke the world record, posting times of 3:51.93 and 3:52.54, respectively. The United States’ boycott of the 1980 Olympics in Moscow prevented Goodell, Hackett and Shaw from competing at their peaks, depriving them of the chance for more medals and the opportunity to race Russian great Vladimir Salnikov in the 1500.

“I don’t think of the (Olympic) races that much,” Goodell said. “I think of the experience of being with all the people at training camp and everything else that went along with being an Olympian. Everyone was so close on the men’s team the whole time. “Sometimes I think about how hard I worked toward a goal, and then accomplished it. When I think of that, I feel very satisfied.”

Goodell was a 5-foot-8 inch, 150-pound student at Mission Viejo High School with All-American, boy-next-door good looks and Huck Finn smile when he made his Olympic debut. After being one of the nation’s most sought-after high school recruits, Goodell went on to UCLA, where he graduated with a degree in economics. He grew two inches taller and gained 15 pounds of muscle in college. “I got a letter from some school in just about every state and some from schools I had never heard of,” Goodell said. During his collegiate career, he won nine NCAA championships in the 500y and 1,650y free and in the 400y individual medley from 1978 through 1980. Only two other freshmen have ever captured three individual titles in NCAA competition — Mark Spitz and John Naber. “He had a will to win that I have seen in few other athletes,” said Ron (Sticks) Ballatore, Goodell’s coach at UCLA. “He wouldn’t let himself be beaten. He could summon up those hidden reserves and turn it on like few others when somebody was after him.”

While swimming for UCLA, Goodell seemed invincible. He did not lose a single race in any event during the 1978-79 college season. As a sophomore, he became the first man in history to go under nine minutes in the 1000y free during a dual meet at Texas on Jan. 13, 1979. His time was 8:52.45.

Born in Stockton, Calif., Goodell lived there until he was 3 years old.

His start in the sport wasn’t without a few anxious moments. At age 6, he was afraid to get into a pool without a life jacket. It took a while for him to gain confidence around water.

Two years later, when his family moved from Walnut Creek, Calif. – where there was no swim team – to Mission Viejo, his confidence started to kick in. His family picked out a house behind the community pool. They enrolled their son in the Mission Viejo Nadadores Swim Club where Goodell started training with Mark Schubert, a young up-and-coming club coach who wanted to build a championship club program.

At 9, Goodell won his first first-place ribbon in the Class B 100y individual medley and in the 50y butterfly. He was never an age group hotshot, but he showed continuous improvement throughout his age group career.

Schubert, who would later become one of the world’s top Olympic coaches, believed in long hours of practice. Several swimmers, not wanting to do the work, dropped off the team. Goodell, who split time between swimming (six months of the year) and junior high football, stayed with it. After a while, he realized he was too small to play football and decided to get serious about swimming at age 13 after watching Mark Spitz at the 1972 Olympics win medal after medal on television. Schubert decided to switch Goodell from the backstroke to freestyle and worked him long, hard hours. The work paid off. He made it to the national championships in 1974 while just a freshman at Mission Viejo High School. At the 1975 World Championships in Cali, Colombia, he finished a surprising second to Shaw in the 1500. That was all the motivation he needed. He stepped up his training, which prompted his mother to nickname him “Old Salt Mine.” “I think my success was mainly because of [Schubert],” Goodell said. “I remember when he first came, he told my dad that I would probably make the nationals by the time I was a junior in high school. That was when I was in seventh grade. As it turned out, I made it as a freshman in high school [in 1974].”

When Goodell was in eighth grade, Schubert changed his training to distance freestyle, rationalizing it was the best route to nationals for Goodell.

Goodell trained six hours a day, before and after school, 120,000 yards a week in the “Animal Lane,” which was Lane One of Mission Viejo’s workout pool. The “animals” were the distance swimmers who were often called crazy by club mates because they did 5,000 to 10,000 meters for time and 20,000 meters or roughly 13 miles a day.

“We just tried to kill each other with work,” Goodell said. “It got so intense that everyone just got better as we went along.

“It was kind of a thing of pride to be in the animal lane. You didn’t become an animal until the other animals decided by the way you worked out. You tried harder when you were really dead.”

He never took a day off until the Olympic Trials. The work paid off. Goodell was one of eight swimmers from Mission Viejo to qualify for the 1976 Montreal Olympics. He was one of only three members who had been with the club since it started in 1968. His first two major victories came at the Olympic Trials.

“Brian was a coach’s dream,” Schubert said. “He possessed uncanny determination and talent. He was one in a million. I watched him do repeats in practice I didn’t think anybody could hold, but Brian did them consistently.”

At the Olympic Trials, Goodell set world records in both the 400m and 1500m free. He went on to win a pair of gold medals at the Olympics in both events in world record times, becoming one of the youngest male Olympic champions of the modern era. He upset Shaw and Bruce Furniss, two swimmers he had never beaten before in a major 400 race.

At age 22, Goodell retired from the sport. “I accomplished all I really wanted to,” he said.

In his 16 years of swimming, he broke five world and eight American records; was national champion 10 times; won nine NCAA championships and was honored as the world’s top male swimmer twice, once in 1977 and again in 1979.

Since his retirement from swimming, Goodell has been inducted into the International Swimming Hall of Fame, the UCLA Athletic Hall of Fame and the Orange County (Calif.) Sports Hall of Fame. He has served as an on-camera announcer in a variety of sports for ESPN and Prime Ticket. He has also been extensively involved in commercial real estate development of master-planned communities and private correctional facilities.

Goodell has created California-based Brian Goodell Presentations, where he shares his visualization techniques and motivational strategies to various companies, teams and schools. His presentations are considered dynamic and highly inspirational, based on his Olympic success, dedicated training and work ethic.