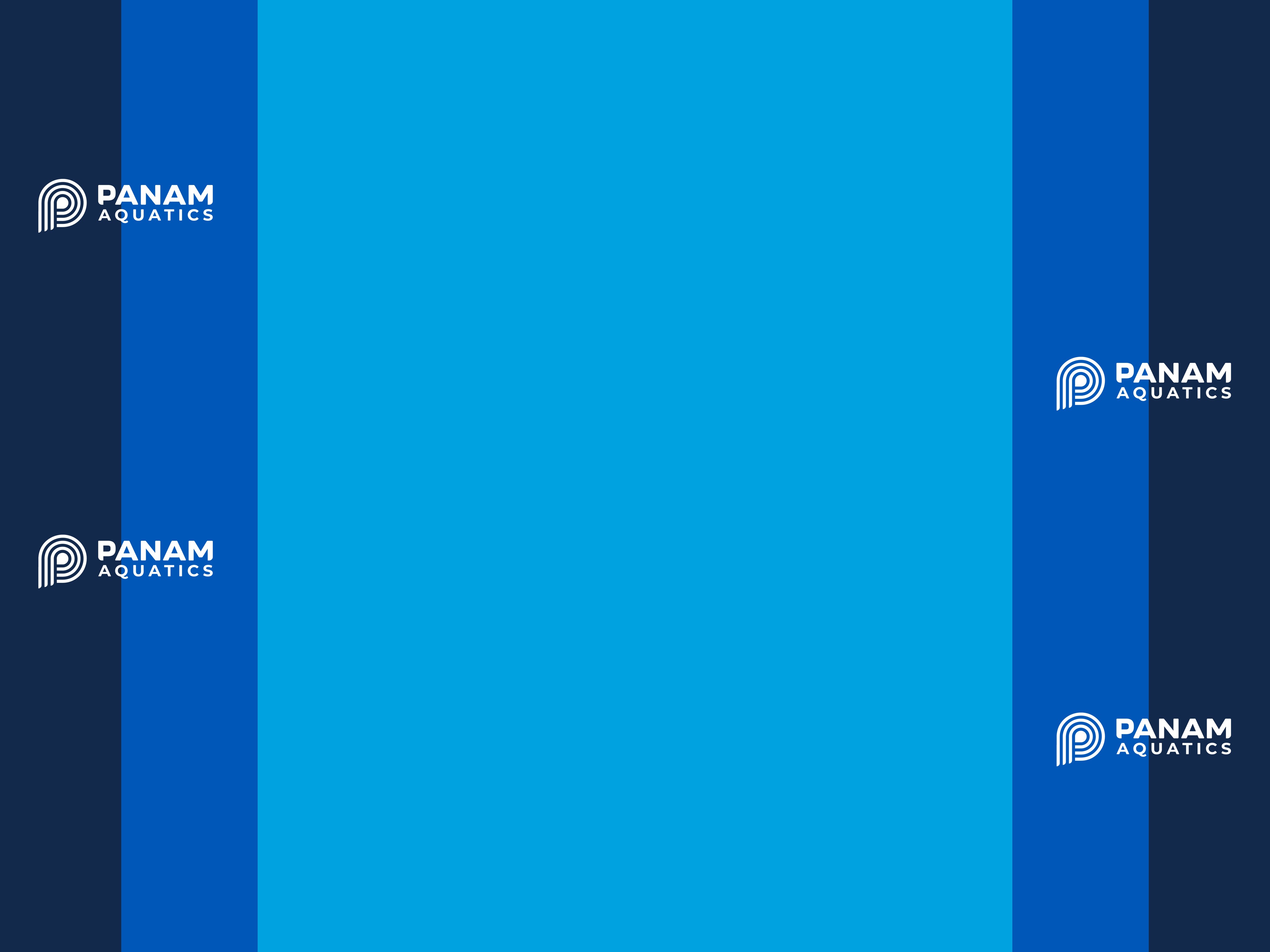 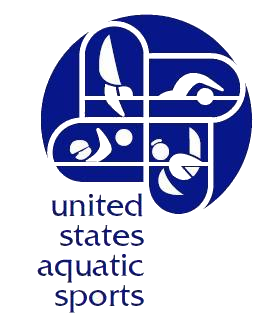 Max Ritter Award 2018 Recipient
Frank "Frankie" Flowers
On Friday, June 15th, Frank "Frankie" Flowers was revealed as the recipient of the 2018  R. Max Ritter Award.
Dennis Ryther, the Vice President of the UANA Technical Open Water Swimming Committee made a surprise presentation to Frankie during the Sponsors Recognition Luncheon on the eve of the annual Flowers One Mile Sea Swim.
Video of the Presentation
The R. Max Ritter Award (R. Max Ritter History) was donated by the Ritter Family and is presented annually by United States Aquatic Sports to the organization or individual of a FINA member country who has contributed the most to the advancement of understanding and good will among nations through international participation in amateur aquatic sports. 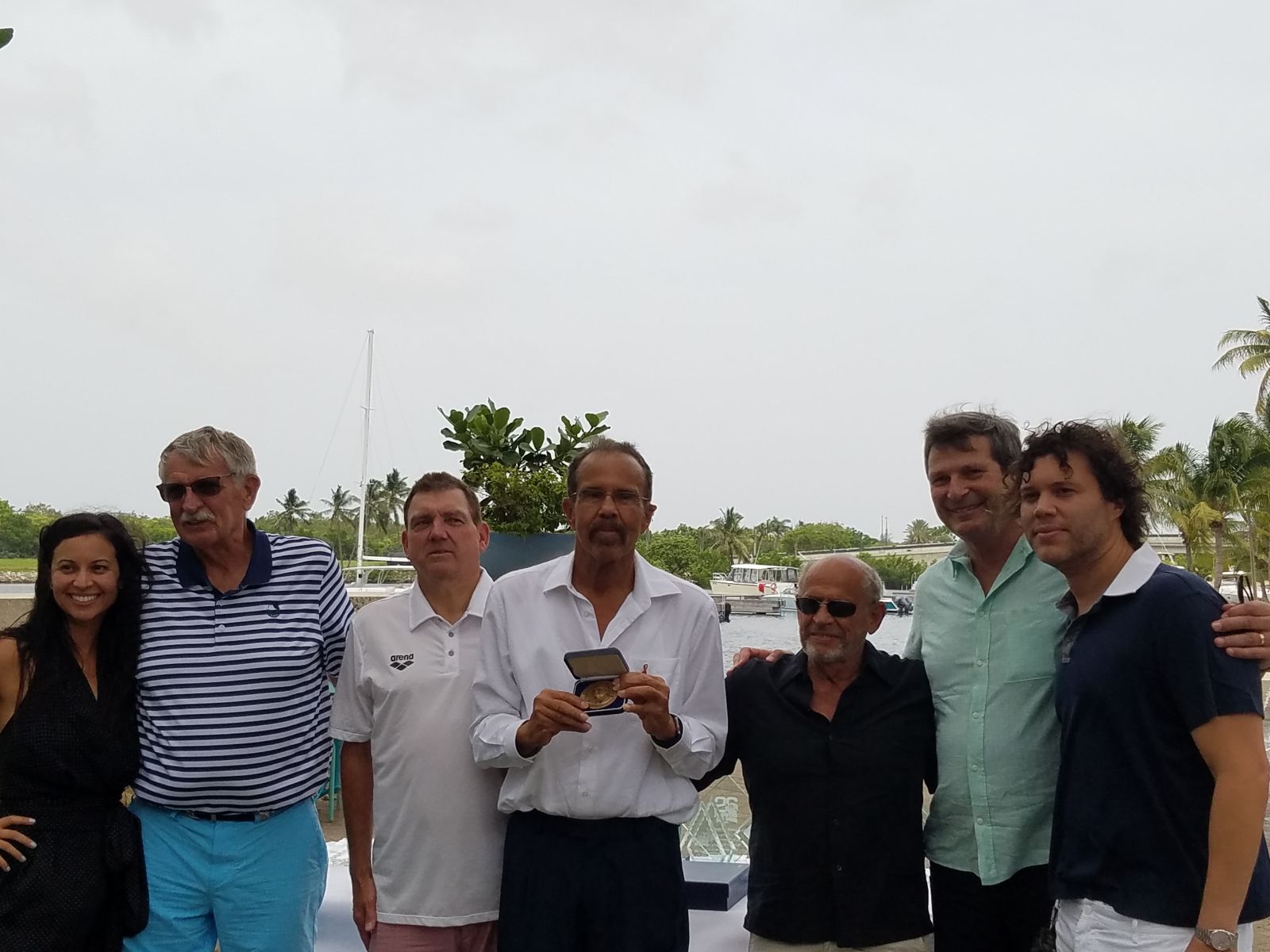 Speaking of Frank Flowers it is important to talk of the growth of the Flowers One Mile Sea Swim. Starting 27 years ago with less than 60 swimmers to over 1200 last year.  More importantly all profits go to charity. Countless number of Olympic Swimmers, many from the USA have been invited to participate in the Flowers One Mile Sea Swim over the years.  Many are with us and will be competing in the the 26th edition tomorrow.  Each of these Olympians have treasured their contact with Frankie and learned from his great example.

My first two years involved was the Feed the Children Charity.  The next two was Special Olympics and the past three was the Cayman Cancer Society and this year is the Cayman Islands Crisis Center.

Because of the Frankie's financial success of the Sea Swim, the proceeds were donated to fund the first bone marrow registry started in the Caribbean.  There is no telling how many lives will be saved because of a swimming event.

There is no one that deserves the Max Ritter award more than Frank Flowers.

Extracts from The Cayman Compass: If you don’t know who Frank “Frankie” Flowers is, you either don’t drink water, swim in water, or live in the Cayman Islands surrounded by water.

He is an athlete, successful businessman, and a visionary when it comes to open water swimming competitions. His Flowers Sea Swim, which began in the early 90s with only about 60 participants, has swelled to more than 800 entries registered, with swimmers flying in from all over the world. He has hosted Olympic medallists in past years to mentor the Cayman Islands’ young swimmers, and supported Penny Palfrey in her successful bid to swim from Little Cayman to Grand Cayman in 2011.

Peter MacKay, past president of the Cayman Islands Amateur Swimming Association, has this to say about the nomination: “Frank Flowers is a long serving director on the CIASA board. He is a stalwart in the Cayman swimming family and the visionary behind the internationally successful Flowers Sea Swim. He is the most deserving to be nominated for – and to win – this award, and I am urging everyone to visit the site, vote, and encourage all your friends to do so as well.”

Thanks to the popularity of the Flowers Sea Swim, and Mr. Flowers’ dedication to the local community, his organisation has donated thousands of dollars to charities and the needy. His daughter, Dara Flowers-Burke, is also firmly on board.

With his vision and relentless drive, swimmers from the Caribbean, Latin America, Europe, Australia, South Africa, Asia and North America gather along the course of the stunningly gorgeous Seven Mile Beach on Grand Cayman to compete in a race that offers over $100,000 in prizes. Forever generous, Flowers focuses his efforts on the needs and desires of the participants and the charities that he raises bucket loads of money for. The Flowers Family over-delivers on its promise for a memorable extravaganza with overwhelming hospitality for Olympians and over 800 swimmers.

For his persuasive abilities to create an infrastructure and support for a signature event on the world's calendar, for his generosity in donating the proceeds from the event to those in need, the year-round work of Frank Flowers is a worthy nominee for the 2012 WOWSA Open Water Swimming Performance of the Year.." 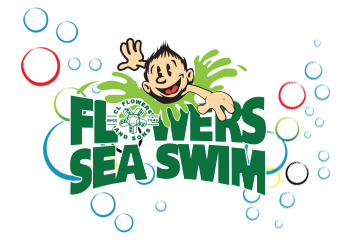 ABOUT THE FLOWERS SEA SWIM

STARTED 26 YEARS AGO BY FRANKIE FLOWERS

The Cayman Islands, located in the beautiful Caribbean Sea with crystal clear waters, white sands and warm weather all year, is the perfect location for outdoor water sports. Over two decades ago, against such an ideal backdrop, the tradition of the Flowers One Mile Sea Swim began. As the event swims into its 26th year on June 16, 2018, we invite you to participate in what has come to be considered a must-do event for open water aficionados and has been named one of the World’s Top 13 Open Water Swims.

The Flowers Sea Swim is Grand Cayman’s flagship sporting event. Last event’s race boasted over 1000 registrants. Participants vary in age from 8 to 80 years old and in skill from novices and first-timers to gold medal Olympians and world championship open water specialists from around the globe. The Flowers Sea Swim welcomes Swimmers from all strokes of life!

The unique draw of the Flowers Sea Swim is not only its flawless course conditions along Cayman’s beautiful Seven Mile Beach, but the numerous random prizes. The race is the world’s richest open water event with over $100,000 in cash and random prizes. The odds to win a random prize are 1-in-7 and previous giveaways have included blackberries, Ipad’s, hotel stays, and dozens of airline tickets to premier destinations such as Miami, New York, Panama, Rome, Los Angeles, Las Vegas, Chicago, London, Dublin, Rio De Janerio, and Toronto. All finishers receive a fantastic t-shirt and goody bag filled with prizes and surprises!

In addition, this year, Cayman will also continue to host the UANA Open Water Swimming Championships, which will see delegations from North, South and Central America visit the island to compete in several events from June 15 to June 18.

All registration proceeds will be donated to the Cayman Islands Crisis Centre.