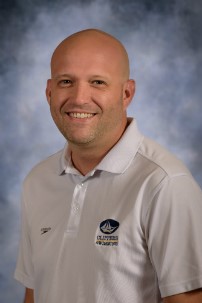 Erlanger, KY – Northern Kentucky Clippers have named Chad Rehkamp the Clippers new Head Coach effective immediately.  “We are excited to have Chad take over the helm at the Clippers because of his proven leadership with the club” said Board President, Dr. Tom Smith.

Chad, who was previously the Associate Head Coach, has been with the Clippers for over 20 years.  Chad has held several positions of increasing responsibility including Head Age Group Coach.

“Chad has been recognized on a national level for his expertise as demonstrated by his many trips to the USA Swimming athlete camps and coaching sessions at the US Olympic Training Center.  He has all the qualifications and expertise to take the club to the next level” said Dr. Smith.

“I’ve spent most of my professional life so far with the Clippers, and I’m honored to take over as the new Head Coach” said Rehkamp.  “Those who know me understand my passion for working with the younger swimmers, and I intend to continue with doing that as the new Head Coach, but I am also excited to work with all the age groups going forward.  In addition, I look forward to coaching our swimmers competing at the highest levels of competition, most of whom I coached in their more formative years.  This is an exciting time for the Clippers family, and I look forward to where we are taking the team.”

Over the years he has developed one of the best age group programs (14 & unders) in the country as recognized by USA Swimming.  Some of his accomplishments include:

A Northern Kentucky native, Chad swam at Simon Kenton High School and coached at the Kenton County YMCA for several years before coming to the Clippers.