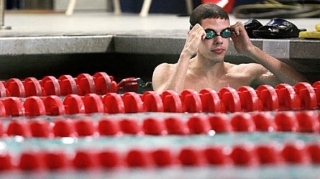 Motivation is in short supply this time of year for Grant Alef.

February's state swimming meet seems so far away for the Kaneland senior. The Knights don't have a full-time swim team or coach, so Alef's high school season technically lasts two weeks – sectionals and state. He's done it for the past three years, so he's used to it. That doesn't make the morning or evening practices any easier, though.

He'll work out at the Kishwaukee Family YMCA in DeKalb, and take pointers from those who have helped him on the club level, as well as friends. But in the pool, it's just Alef working without teammates toward his goal of a top-three finish in the 100-yard backstroke at state and finishing sixth or better in all of his events.

Alef's DeKalb County Swim Team friends from the DeKalb-Sycamore co-op team say they feel for Alef and know that his talent would serve the high school team well if Kaneland also was part of the co-op.

"I definitely wish Grant lived in Sycamore or DeKalb because he would be an outstanding addition to our team," Sycamore's Michael Gordon said. "But he's down at the Y working his butt off all season long."

"I feel like it's weird because he's used to training with these guys," DeKalb-Sycamore co-op coach Leah Eames said. "But at the same time, he's used to swimming with that club team the rest of the season."

But beyond the high school level, Alef has a few far-reaching goals, such as dropping a full second in his 100 backstroke time, which would put him below the cut time for the Olympic trials.

"I think I can do it," Alef said. "I went into last year's 100 back at the Long Course National Meet and dropped two seconds. There's a lot of stuff I can improve on."

Before those trials, Alef will head to the University of Minnesota, where he signed a national letter of intent to swim for the Golden Gophers next fall. It will be his first time competing for a school with teammates and a full-time coach.

In the meantime, Alef will continue to work as he is accustomed to for this time of year – on his own.

Coach: Leah Eames
Last year: Advanced two relays and individuals in four events to state
Key returners: Michael Gordon, senior; Kei Ishimaru, junior; Cory Page, senior
Key losses: Chad Thompson, Taylor Roose
Ready for impact: Sam Seneczko, senior
Outlook: This is the deepest team in a long time for the DeKalb-Sycamore co-op, as Eames estimates about 25 kids came out for swimming this season, including some who have never taken a lesson before.
"Unfortunately when there's only one of me, I'm maybe not giving them as many learning tips as possible," Eames said. "The first couple of days, they were kind of just thrown in and hopefully they stayed above the water until the other end. But they've improved their strokes a lot and they've got a lot of guys to learn from."
The Barbs will be led by Gordon, who signed with Xavier in the fall, where he will join Thompson and older brother David Gordon.
"We've got a strong corps of swimmers who swim club as well," Gordon said. "So at the very least, it's going to be a very fun year."
Ishimaru, who made an unexpected run to the state meet last season in the 100-yard butterfly, has set the bar even higher this season.
"I'm hoping maybe to attempt to make finals in one event, definitely go for a sectional championship," Ishimaru said.
Ishimaru hopes to emulate what Thompson did last season.
"Chad Thompson, that drive that he had, I want to take that and put it into my swim game," Ishimaru said. "That mentality of always winning, I like that."
Eames' take: "There's a ton of guys, lots of different ability levels. But, overall, it's been a fun couple of weeks so far."