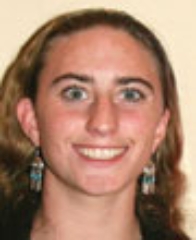 Schafle was the most lauded player in the Valley. The forward was both Second Team All-Sac-Joaquin Section and Second Team All-Metro by The Sacramento Bee for the second year in a row; was named the MEL Most Valuable Player and team MVP; and was a member of the Olympic Development Program for USA Water Polo. She set new school records with 258 career goals, 63 season assists, 144 career assists, 124 season steals and 308 career steals. Schafle had a significant impact both offensively and defensely this year, amassing 98 goals with 44-percent scoring accuracy, 63 assists, 124 steals and 45 earned exclusions.

“Corinne was among those girls who worked very hard during the offseason to really improve her individual skills and those, combined with her quick swimming, made her a significant asset for us this season,” Vintage coach Julian Szmidt said. “Corinne’s desire to score expressed itself in repeated drives on the goal, which resulted in either exclusions, goals or an assist to a player on the weak side of the goal.”