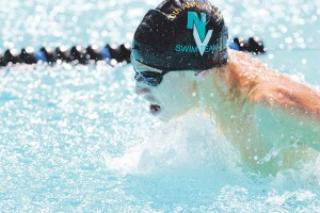 Facey’s daughter, Mia, 13, had already taken first place in the 50-meter freestyle, 400 individual medley and 400 free, a second place in the 100 butterfly and a third place in the 200 breaststroke on the weekend. And there was still a lot more races to go yesterday in the C/B/A+ long course meet.

“What’s nice about it is being part of that, especially on Father’s Day, is to see what you’ve really accomplished in life,” said John Facey, one of 80 volunteers with the Napa Valley Swim Team. “She looked great. What’s great is she enjoys it. It builds a lot of character. We’ve seen that. She’s become very responsible being associated with the team. It’s been a great experience.”

Mia Facey recently graduated with honors from Harvest Middle School and will start her freshman year at Napa High School in the fall. Facey is one the club’s top age-group swimmers.

The three-day meet drew about 500 swimmers from 40 Northern California teams and clubs. Wine Country Aquatics of Napa and the Monticello Aquatic Club Seals Swim Team were also represented. There were races of varying distances, depending on age, in freestyle, butterfly, backstroke and breaststroke. The meet didn’t have any relays. Individual awards were presented.

The overall management and organization of the meet have made Napa’s Father’s Day Frenzy one of the top places on the Northern California youth swimming schedule. It’s one of three meets that the NVST — which is celebrating its 50th year, offering year-round competitive swimming — puts on. The others are short-course meets, traditionally held in November and February, on a 25-yard course.

In a C/B/A+ long course meet, swimmers of all time standards can compete, as there are no limits either on the faster side or slower side.

“Our pool is pretty well respected for allowing for good performances,” said Asher Green, the NVST’s head coach. The water temperature was set at 81 degrees.

Just as Facey was having a big meet, so was another NVST member, Ximena Mendieta, 16, who will be a junior in the fall at Justin-Siena. Mendieta, who was awarded the most valuable swimmer of 2011 for Justin-Siena, won the 800 free and took second in the 50 free.

“They are both pretty versatile as well,” Green pointed out. “They both love the sport of swimming. They love working out. They’re very coachable, enthusiastic. They’re also physically gifted. Ximena has a great capacity for work. She’s a wonderful workout swimmer. Mia has some natural speed, natural size.”

The 5:30 to 8 a.m. workouts Monday through Friday don’t scare Facey or Mendieta. Neither do additional Monday, Wednesday and Friday sessions, which run from 4:40-6 p.m. Some of those are dryland workouts.

“It just feels really rewarding when you win or get a best time,” said Facey. “It feels like the practice is paying off.”

Mendieta likes the close, family-type atmosphere and the friendships that she has developed being a member of the NVST.

Like John Facey, Ray Mendieta was also proud of the way his daughter performed. He said Ximena is committed to the sport and the extensive training that is required.

“As parents, we are very proud,” said Rosa Mendieta, Ximena’s mom. “Like anything in life, if you really want something, you’ve got to work every single day. And she’s been doing this for the last nine years. To get those times means a lot of discipline. To get here at 5:15 in the morning, it is a challenge, a big commitment.

“Swimming does a lot of things. It’s not just a sport.”

It was a busy weekend for the NVST, which also offers a high school preseason training program, summer swim classes and pre-competitive swimming instruction. Three members — Megan Morris, Elise Roberts and Sam Starr — were entered in the 44th Santa Clara International Grand Prix at the George F. Haines International Swim Center in Santa Clara. The USA Swimming Grand Prix Series meet is part of a seven-meet series that is held in different cities throughout the U.S. each year, and the venerable Santa Clara International was recently designated as an annual Grand Prix stop. Although the vast majority of Grand Prix meet competitors are amateurs, professional swimmers compete to win an overall series prize of $20,000, determined by point totals derived from top three individual event finishes at Grand Prix meets.

Morris, Roberts and Starr qualified for the Santa Clara International Grand Prix during the short-course season.

“It was great for them to qualify,” said Green. “It was a great honor, but it was also a lot of fun for them. They went there and they competed well. It’s valuable to put things in perspective as well. When they’re in the same field as the world-record holders and Olympic gold medalists, it’s humbling, but it’s also inspiring.”

Morris, who will be a senior at Napa High in the fall, returned to town to swim in the Father’s Day Frenzy Sunday. The opportunity to compete in Santa Clara, said Morris, was inspiring.

“It was a lot of fun to see all the fast swimmers. Even if you don’t make finals, you like to go and watch and you can see how they swim and the strokes,” said Morris. “It was just an incredible experience.”

Wine Country Aquatics of Napa was represented by 15 swimmers, including Sydney Flint, Hannah Edwards and Shea Schurring, who each turned in impressive swims.

“We’re just in the beginning of the training season and we’ve already seen some big drops, some big time drops, and some excellent race strategies being swum,” said Sarah Carmody, an assistant coach with WCAN.