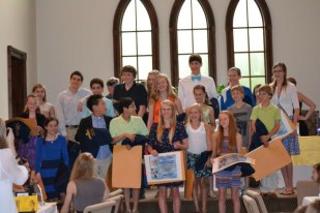 I have hosted annual swim banquets for 35 years now, and I never had as much fun as I had this year with The Hurricanes of Columbus Aquatic Club. I don't know what it was, the venue, (St. Andrews Presbyterian Church) those that setup the event, Alicia Newton, Nancy Lewis, and Beth Leary, the coaches I have the honor of working along side, Elizabeth Hughes,Cari Best, and Jessica Medeiros, or it was the subject I got to speak about, our outstanding athletes. Which ever, the combination made for a great evening.