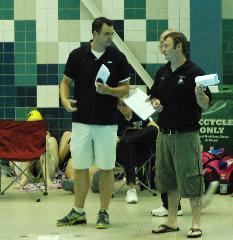 SWIM-SERIES: WANT YOUR KID TO BECOME A CHAMPION IN THE POOL?

Want your kid to become a champion in the pool?

Yo! Mom and Dad!!! Want your kid to become a champion in the pool? IF YOU DO, THEN YOU SHOULDN'T COACH!!!

I listened to his Dad frantically outlining all kinds of last minute race instructions. "This is a big race son. Don't forget to streamline out of your start and turns…and remember, no breathing into the turns. You've got to make sure you get a good start…and build the race in the second 100. You've got to make sure you don't back off like you did the last time….blah…blah…blah." His 13-year old son silently stood there, head down, looking at his toes. I could only imagine what he was thinking.

I guess Dad didn't realize that his son already had a very good coach. More than likely Dad meant well and was trying to be helpful. I know for a fact, however, that Dad didn't have a clue that his pre-race coaching with his son was going to guarantee, as in you can take it to the bank guarantee, that the boy would have a lousy swim. Certainly if he had known this he would've kept his lips sealed and simply encouraged his son to just go out there and have fun.

Throughout the swim, Dad's voice boomed out from the stands, "Go Billy, come on kick! Swim faster….Keep those hands together boy!…Pick it up now! Pick it up! Yadda, Yadda, Yadda!!!!" Unfortunately no amount of yelling and urging was going to get Billy to swim fast today. He was, as I had predicted, toast. His swim was several seconds slower than it should've been and, in the stands after the race, Dad couldn't contain his obvious anger and disappointment. "What happened out there?!!! You swam so badly. You didn't do anything we had talked about! Why Billy?!!! Why did you not do anything we had planned?!!!"

Now Dad, just what exactly is Billy supposed to say to you here? "Well gee Pops, I just thought, since I've been working so hard and so long, busting my butt to get up early, and pushing through mountains of pain and fatigue, that I'd just take this opportunity to waste all my training and embarrass myself, my coach and you in front of all these people!" Come on Dad! Get with the program!!! I have never met a swimmer who wants to swim poorly on purpose. Don't you know that Billy already feels badly enough without your angry critique? Are you unaware that he probably feels just terrible that he let you down? Whether you know it or not, the last thing your boy wants to do is to be a disappointment in your eyes! What he really needs after a bad race is your support, NOT your anger, disappointment and inappropriate and unhelpful critiques! (Yes! They are unhelpful coming from you, even if you know what you're talking about!) You won't help him feel better about himself nor swim faster by going down this road! All you'll get him to do is eventually hate himself, hate swimming and have a real hard time being around YOU!

In too many meets across the country Moms and Dad's are repeating the mistakes that Billy's Dad has made here. What they don't realize is that by becoming over involved in their children's swimming and "coaching", they are killing their kids' enjoyment of the sport, setting them up to fail and insuring that their children will become swimming, drop-out statistics. Over 70% of kids between the ages of 8 and 12 prematurely quit their sport because of too much pressure from adults, (parents & coaches).

So if you really want your child to go fast and as far as possible in this sport, let me coach you here. You have two important roles with your child that will pave the way for their swimming success. First, be your child's best fan. Support them. Love them unconditionally. Pick them up when they fall. Cheer for them. Don't tie their love and self-worth in your eyes with how fast they go in the pool. Second, DON'T COACH!!!! Don't sit in the stands and time them! Don't film their stroke mechanics and do stroke critique sessions! Don't remind them of everything the coach has been telling them! Don't try to motivate or focus them before their races. Don't force them to sit down and set goals! Don't force your goals on them! Don't discuss their race strategy and what you think they should be doing. Don't critique their races afterwards and help them correct their mistakes unless they ask directly. These are all the coach's job, not yours!

The best swimmers in the world have taught me one thing about what kind of parenting breeds Olympians. Most of the Olympian's I've talked to or worked with over the years have had parents who were incredibly supportive and unobtrusive. They weren't pushy, they didn't coach and they weren't over involved! Instead, they allowed their son or daughter to own the swimming. Remember, don't coach! Your job is to "love 'em", the coach's job is to "shove 'em"