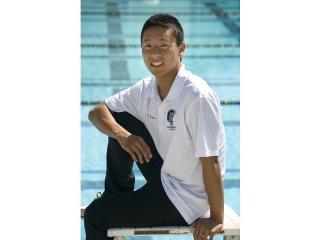 Aquazot Swimmer, Corey Okubo is the 2013 Boys Swimmer of the Year!

This is the THIRD YEAR IN A ROW that an Aquazot swimmer has been named as the OC Boys Swimmer of the year!

It was time for Corey Okubo to show what he could do.

After not being able to fully rest for the CIF championships last season because of the upcoming U.S. Olympic Trials, the University junior geared his training this spring for the Division 1 meet.

His results were historic. Okubo smashed Darren Ward's Orange County record in the 200-yard individual medley at the Pacific Coast League finals and then dropped another second off that time at the CIF Division 1 finals.

He also blazed in the butterfly. For his efforts, Okubo has been selected the Register's male swimmer of the year for 2013.

Capo Valley's Yancey is boys swim coach of the year

"I've never really tapered for CIF before this (season)," he said, "so this year was perfect for me to get going ... and see what I can actually do."

Once Okubo started rolling, he was difficult to stop.

At the Pacific Coast finals, he clocked a then lifetime-best time of 1 minute and 48.02 seconds in the 200 individual medley to break Ward's 1987 record (1:48.83) for Sonora – the oldest standing boys county record.

Then at the Division 1 finals, he outdueled Corona del Mar's Liam Karas – also his Aquazot club teammate -- to lower his county record to 1:47.07. So in a matter of two weeks, Okubo pushed past Ward's record by almost two seconds.

"There's something special there," Northwood coach Alex Nieto said of Okubo at the Pacific Coast meet.

Okubo's 200 IM ranked third fastest in the nation as of Thursday afternoon according to All-America applications processed by NISCA.

He also delivered a breakthrough performance in the 100 butterfly at the Division 1 meet.

In a competitive final with Redlands' Kyle Gornay and Dos Pueblos of Goleta's Alex Valente, Okubo placed third in a lifetime-best 48.44. Gornay touched in a state-record 46.83, and Okubo's time placed him fourth in county history.

"I had never been under 49 seconds before this high school season, and all of sudden, I drop to 48.4, so I was real happy," Okubo said.

Okubo also challenged for All-County honors in the 100 backstroke, posting a 50.40 in early April. The time places him 13th in county history.

Those who know Okubo said his success is well deserved because of his work ethic.

"He is the leader of Aquazot," said Edison All-County sophomore Thomas Smith, who also trains with the club. "He inspires a lot of us younger guys."

Team goals are important to Okubo. He said he wanted to capture the 200 individual medley at the Division 1 meet mostly for his teammates and the team points.

Okubo also is motivated by his other team: the U.S. juniors. Last summer, he captured a silver medal in the 200-meter butterfly for the United States at the Junior Pan Pacific Championships.

He hopes to race for the team again by qualifying this summer for the FINA World Junior Swimming Championships.

"Being part of the national junior team really opened up my eyes on a new perspective on swimming," he said. "It's really about swimming for your team."

Okubo also has served as the junior team's unofficial translator at meets. His parents were born in Japan and he speaks Japanese.

"When the U.S. kids wanted to talk to the Japanese kids, I would translate," he said.

Yes, when Corey Okubo gets a chance to show his skills, he impresses.