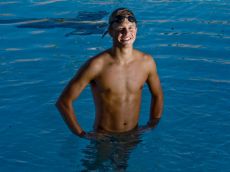 IRVINE – Thomas Smith was warming up for his race at the Speedo Grand Challenge last month when he noticed two crutches on the pool deck at the William Woollett Jr. Aquatics Center.

For a swim meet that attracts chiseled, world-class athletes to rising teenagers, signs of fragility are rare.

Smith, 15, who just finished his sophomore year at Edison High, soon put the puzzle together. He spotted a swimmer whose left leg was amputated, it appeared, at the knee.

The Aquazot club swimmer froze, not in fear but to find perspective.

"For me to see that, it was a possible reflection of me," Smith said. "I was, 'Wow, this guy is dedicated to the sport and he wants to race.'"

Smith was jolted because he has a benign tumor in his left knee. If the tumor continues to grow, he could face his own amputation.

But like the swimmer he saw, Smith races on, often with a mind-set that he is chasing more than a first-place finish. And he doesn't only display that attitude at the pool. He carries it throughout his life.

Despite his youth, Smith has learned to separate the pursuit of a particular finish at a swim meet from the challenge of overcoming obstacles.

Smith increasingly gravitates toward conquering his own trials. He learned in December 2011 of his tumor, but later that month he joined Tyler Lin (Corona del Mar), Justin Hanson (Corona del Mar) and Matthew Wong (University) on an Aquazot relay team that set a national age-group record in the 400-yard medley.

Smith periodically has his knee examined, but a new physical ailment surfaced this spring.

He embraced this challenge, too.

"I knew that there was something deeper for me to accomplish than just winning," he said.

The discomfort was caused by sacralization – or an abnormality – in Smith's spine since birth.

The soreness kept Smith from racing in a few meets, but he pushed past the pain to deliver a record-setting performance at the Sunset League Finals at Newport Harbor.

Smith edged Collin Gladys' 2004 meet record for Esperanza in the 200-yard individual medley with a time of 1 minute, 52.84 seconds. He also broke the meet record of his older brother, Josh, in the 100 backstroke with a 50.50 and was selected the league's top male swimmer.

Smith was in so much pain during the meet, he stayed in the warm-up area most the time so that he wouldn't put weight on his back.

"My CIF, in my mind, was a success," he said. "I'm not going to let a back issue overcome that desire to be in that moment."

Smith, whose back is feeling better these days, has also put his energy and determination toward making a difference in his community and beyond.

During spring break, he traveled with Seaside Community Church in Huntington Beach on a mission to Panama.

Smith raised money for the trek by designing and selling brightly colored T-shirts that read, "zero to hero 33 a.d.," his tribute to Jesus.

He handed out nearly 50 of the T-shirts on the trip, and he helped host a vacation Bible school and a surf contest for teenagers.

The highlight of his trip, however, was meeting a young boy named Oliver. Smith was touched when a 4-year-old asked to be held.

These are the moments that seem to mean more to Smith than his many swimming accomplishments. While he races hard in the pool, he longs to encourage others.

He smiled after a recent club practice as a middle school-aged boy built the courage to share that Smith inspired him to swim the backstroke.

Another club teammate, Katie Glavinovich, was so inspired by Smith that she wrote a school essay about him.

"He's one in a million, for sure," said David Nehrig, a youth pastor at Seaside. "He inspired the other kids on the trip (to Panama). ... Thomas is a go-getter, a difference-maker."

Smith now hopes to volunteer with Orange County-based NEGU, a childhood cancer foundation that encourages kids with cancer to "Never Ever Give Up."

The organization, inspired by late Mission Viejo Nadadores age-group swimmer Jessie Rees, is holding a "Joy Splash" at JSerra High on Saturday from 10 a.m. to 2 p.m.

"I heard this one guy say, 'You can never out-preach the way that you live,'" Smith said. "I don't go out there and try to change people. It's more that I'm there for them.

"That's really what high school kids need, somebody to be there for them."

No matter what the obstacles, Smith finds a way to be there.