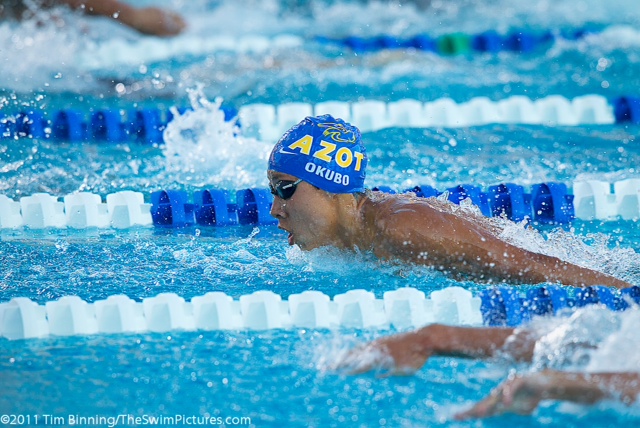 Monday, July 1st, is officially the beginning of the next recruiting cycle for NCAA coaches, as it begins the open contact season where coaches can start calling high school seniors and actively recruiting them.

It’s also a notable day, because it’s when most of the coaching changes you see become official, when contracts begin and end, and so there will be lots of big coaching change announcements coming out.

In honor of that deadline, let’s take a look at the top 10 male recruits in the class of 2014. This is a very high-level look, focusing on the American recruits that will outline who the top targets are for the top programs. Each team has their own needs and might value swimmers differently. There’s plenty more recruiting news and analysis yet to come. It’s a subjective ranking, but it’s based on what college coaches look at in terms of value. For example, swimmers who will contribute on four relays as a freshman are highly prized, rarity in the class (aka, if you’re a :53 second breaststroker, and the next-fastest breaststroker in the class goes a :57, your value rises to teams who really need a breaststroker), yards is more valuable than meters (though both are considered) and even though it won’t make everyone happy, the class’ top sprinters are probably more valuable than the class’ top milers.

Things we didn’t take into consideration include who your teammate is, who your friend is, or who is a ‘hater’. We expect many folks will disagree with parts of our list, but we hope that there will be better justifications than those.

Note: for the purposes of these rankings, we’ve included international swimmers who train predominantly in the United States, like Joseph Schooling).

When looking at this class, it’s a very, very deep class. Those coaches who portioned their scholarship dollars out and saved a lot of money for this class could cash in big – the classes are deep with talent and international-level experience.

Schooling is a very interesting case, as he swims for Singapore but trains in the U.S. at Bolles High School. He’s already an Olympian – and a legitimate one at that, with a 1:56.6 in the 200 long course fly (that would’ve put him on the U.S. Worlds roster). He could final this summer in Barcelona. He’s the National High School Record holder in the 100 fly; I know we said that yards times count more than long course times, but we’ve made an exception for Schooling. As someone from Singapore, he is naturally more focused on long course, but the event he swims at the high school level (the 100 fly) shows that he’s every bit as impressive in yards as he is in meters. Therefore, count in his favor a 2:00 in the 200 meter IM as well. Also give him credit for the 19.7 and the 43.6 he split in the 50 and 100 yard frees at the Florida HS State Championships this year. We feel good about ranking him #1 on those facts, even if it’s slightly against our methodology laid out above. Schooling could legitimately go pro, especially if he were American or Australian, but friends at Bolles tell us his plan is to swim in college.

Dressel isn’t a part of the Bolles high school program, but imagine how scary their records would be if he were. He’s the fastest long course sprinter in the history of American 15-16 swimming after this last week, and is fairly versatile for a sprinter of his caliber (though, with times like that, he may not need to be). A lot of recruiting buzz can come with training the best sprinters in the country, especially ones that get as much national attention as Dressel has/will, so there’s somewhat of a indirect benefit to that.

Though his long course times will probably catch up at summer’s end, Gornay’s yards swimming is better developed than his meters swimming as of right now. He is an absolute monster in yards, though, with a 1:34.99. That’s a National Age Group Record, and he’s relatively young for an incoming senior. There’s only a dozen swimmers who have matched that 200 free time before they turned 19, let alone before they turned 17. The traditional 800 free relay powers like Michigan, Texas, and Virginia will chase him hard; there’s a lot of incredible sprinters in this class of 2013, but none of them go to the 200 as well as Gornay does. Gornay has monster underwaters too.

Silverthorn is a great example of a National Age Group Record holder who has ‘made it’ as he starts to move into the senior ranks, though he’s redeveloped himself a little. Originally a great middle-distance prospect, in the last year he’s really shown off his versatility. That includes going under the National High School Record in the 100 yard breaststroke (though he didn’t win the race) and with a chance to break it again this season. He was a great backstroker when he was younger too, so there’s a chance to revive that skill as well.

Ogren is another great breaststroker from northern California: they have produced a ton lately. He swims at the PASA, which is loosely affiliated with Stanford, and Stanford has become a hotbed for great IM’ers. He’ll have his options open, though, to leave home if he so chooses, and there’s a lot of top-10 programs that really need to reload their breaststroke groups after a few down years of recruiting in the specialty. He has very good, though not great, freestyle times (45.6 in the 100).

Bentz has some serious national-level credentials, and is sure to have some international-level honors to his name in the future. What’s so scary about him is his versatility. He goes a 1:45 200 fly, a 1:56 200 breast, a 1:46 200 back, and a 1:37 200 free. Put those together, and you can see where his IM potential could be. He can fill almost any role for a college coach, though 200-yards and longer are where his real strengths lie. Watching Bentz swim is a thing-of-beauty: he’s a monster and has that length that causes college coaches to drool.

Powers’ value lies in his physical gifts and his potential. Having only recently taken up swimming full-time, after spending some time as a basketball player, though that also mean that his pure dry-land strength is probably a bit more developed than that of most swimmers coming out of high school. Still, after working with Andy Deichert from the Race Club and Sabir Muhammed, he’s got a great pedigree and should see a high level of continuity going to the program of Mike Bottom, another former Race Club coach.

Either Ringgold or his club teammate Jonathan Roberts could have been on this list, as both are very good. Roberts is more versatile than Ringgold is, but in the college scoring system, only the best three matter. We gave Ringgold the edge because he’s closer to being an immediate national-level scorer in the NCAA. His sprint bests (19.7 and 43.4) are in a rare class among high school sprinters, and his fly (48.4) is good enough that he’ll probably become a classic Nathan Adrian/Josh Schneider 50 free-100 fly-100 free guy at NCAA’s. He’ll be on the championship meet roster as a freshman, though, wherever he ends up.

Lynch is already at the level of a national finalist, and he’s getting faster at a rapid clip. His best time as a junior was three seconds better than his best time as a sophomore, though he was already faster even as a freshman (a 49). His times in long course are better than his times in short course, but if the latter came up to the level of the former across-the-board, he’d move up this list in a hurry.

If the NCAA swam in long course instead of short course, then Okubo might be a hair higher on this list. He’s been 1:58.5 in the 200 meter fly and 4:19 in the 400 meter IM. Okubo’s strengths are in his butterfly and IM races, though if he could make any sort of improvements to his freestyle events as a senior, his value would skyrocket.