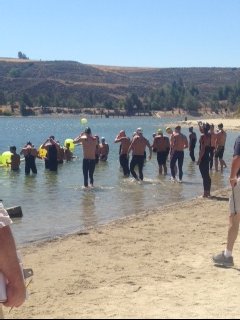 Brittany Kahn finishes 10th in the 10K at U.S. Nationals Open Water Competition for 18 and under!!!

Timmy Hanson finishes 10th in the 5k at U.S. Nationals Open Water for 18 and under!!!

CASTAIC LAKE, Calif. -   What a great weekend for Aquazots, participating in their first open water competition.  The team consisted of Kendall Brown, Brittany Kahn and Timmy Hanson.   The weather was picture perfect, the lake was calm and there was a buzz in the air from the media and fans attending this event!

The weekend started with Brittany Kahn competing in the 10K, warming up in the lake at 7AM to a complete fog covering the lake.  “It was very eerie feeling warming up in the fog not knowing where you are going” Brittany stated.   When race time began at 8AM, the fog lifted, and 42 swimmers began their 2 hour race.  Brittany finished 21th overall, which included Olympians and college swimmers.  Brittany finished 10th for 18 and younger.  When asked about how it was competing in her first open water race, she responded, “I can’t feel my arms and the straps are killing my shoulders.”

Next came the Men’s 10K, Timmy finished 45th overall and 21th for the 18 and younger.  “I was a little disappointed with my performance today, but the 5K on Sunday will be better,” stated Timmy.  Timmy is just  15 years old and was competing against the very best of the open water swimmers, which included Olympians and college swimmers.

On Sunday, another picture perfect day, both Timmy and Kendall were scheduled to compete in the 5K.  The Men’s 5k started first at 8AM and Timmy got off to a great start and finish strong to place 10th for 18 and under. He just missed making the Junior World Team by 1 position. “Obviously I’m a little disappointed to just barely miss making the Jr World team, but it motivates me more for next year and this was a great experience for my first National Open Water Competition” stated Timmy.

The woman’s 5K started at 10am under perfect conditions and Kendall started off fast and gave everything she had.  Kendall finished 27th overall.

When Coach Brian was asked about the first AZOTS Open Water Competition, he stated,” Considering we just began training for this event 3 weeks ago, it was fantastic how the swimmers performed.  I’m so very proud of these swimmers, not only placing very high, but for Brittany and Timmy to even be in contention for almost making the Jr National team for 18 and younger and just missing it, it was an incredible performance considering it was their first time competing in open water.”

CONGRATUATIONS TO KENDALL, BRITTANY AND TIMMY!!!!!!!