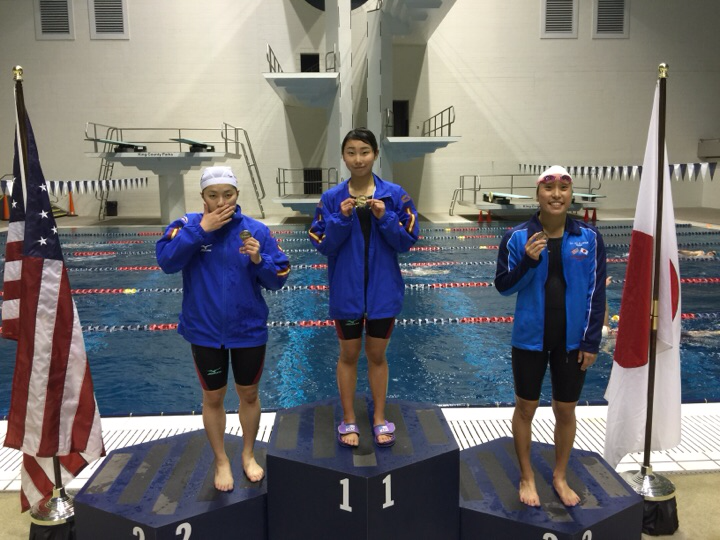 The CA-NV Junior All Star team traveled to Federal Way, Washington, to host and compete at King County Aquatic Center against the Junior All Stars from Itoman Swim Schools of Japan. Thirty-six CA-NV athletes under the leadership of Women's Head Coach Bob Hommel (Boulder City Henderson-CA) and Men's Head Coach Brian Holm (Reno-PC) competed in trials/finals over the two day meet with Itoman prevailing 297-231.   Performance of the Meet for Women went to Courtney Mykkanen representing CA-NV who turned in a winning 100 backstroke time of 1:02.75. Performance of the Meet for Men went to Kai Kinoshita of Itoman with an outstanding 2:16.27 in the 200 breaststroke. Full results may be viewed HERE Saturday evening's finals started with strong 200 Free Relay victories by both the CA-NV Women (Okada, Barksdale, Liu and Maynard) and Men (Montgomery, Anderson, Grissom and Hofstadter).  Emily Barksdale came right back to win the 200 IM in a new Olympic trials time of 2:17.28. Paige Maynard and Vicki Navarro claimed gold and silver in the 100 free while Shane Anderson nabbed bronze for the men. Maynard doubled with a silver in the 100 fly and Kenisha Liu was third. Alex Valente won the men's 100 fly in 54.07 (second overall men's performance on FINA points). Brittany Kampfer placed 2nd in the women's 400 free while Steve Marcin grabbed gold with Joe Lastelic taking bronze on the men's side. Nora Deleske was edged in the 200 breaststroke then Courtney Mykkanen took first with Abby Richter third in the 200 backstroke. The ladies ended the evening with a 1-2 finish in the 400 medley relay with Richter, Alicia Harrison, Maynard and Navarro finishing in 4:14.75 just ahead of Mykkanen, Deleske, Okada and Liu.  The men's team (Klotz, Hofstadter, Valente and Anderson) finished 3rd in its race. Sunday evening the ladies started the evening with silver (Mykannen, Deleske, Maynard, Liu) and bronze (Richter, Harrison, Okada and Navarro) in the short medley while the men nabbed silver with the team of Klotz, Hofstadter, Valente and Pastel. Matthew Klotz set a World Record for Hearing Impaired swimmers with his leadoff 27.14 then later in the session added a 100 backstroke time of 58.43 for gold and a second record. Sole medal in the 400 IM races was a bronze for Madeleine Hurst, but CA-NV came back to finish 2-3 in the 50 freestyle for both women (Navarro and Okada) and men (Pastel and Toland). Kenisha Liu then took gold in the 200 freestyle while Steve Marcin claimed bronze for the men. Courtney Mykkanen then led the 1-2 finish in the 100 backstroke with Abby Richter in second.  Joshua Swart joined Klotz on the podium with a bronze in the men's 100 backstroke. Amy Okada won bronze in the women's 200 fly followed by Alex Valente's 2nd gold in the men's 200 fly. Nora Deleske finished off the evening with a gold medal in the women's 100 breaststroke the the team of Navarro, Liu, Okada and Maynard took gold in the 400 free relay with Richter, Barksdale, Pinson and Mykkanen taking home bronze. The men's team of Pastel, Hofstadter, Montgomery and Anderson closed the meet with silver in the 400 free relay. The two teams joined in a final barbecue dinner after the meet with much trading, picture taking and fun for all.