Tonight, Kai Gambill-Hernandez was honored as All-American Swim Age Group Swimmer of the Quarter. As part of Kai's award, he received a $50 credit to All-American Swim. Read more about Kai's story and nomination below. Congratulations, Kai! 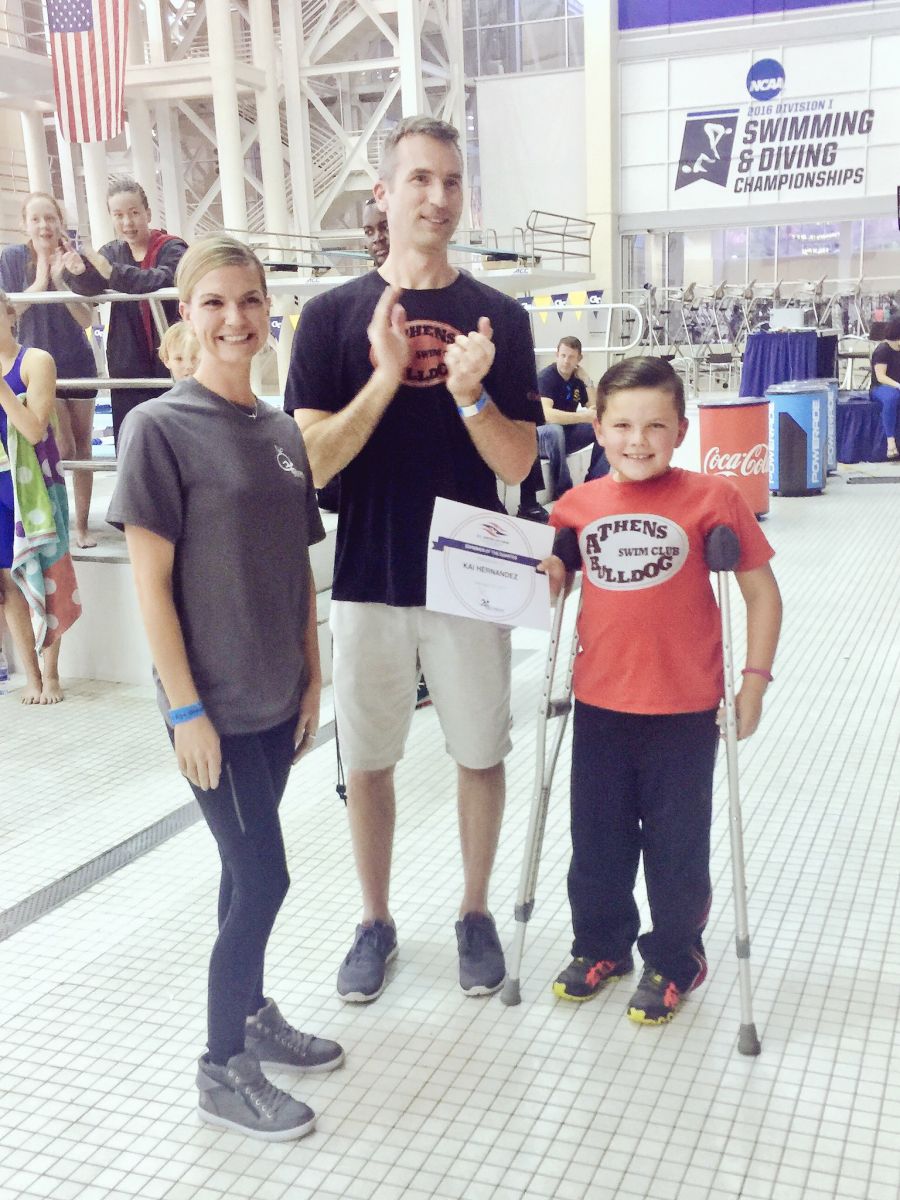 Kai is an 8 & Under swimmer on the Athens Bulldog Swim Club. In January of 2016 he was diagnosed with Perthes Disease, a hip disorder caused by disruption of the blood flow to the femoral head. This lack of oxygen causes the bone initially to weaken and then to collapse. Though Kai loved to swim, his condition had worsened to the point that everyday activity resulted in severe pain. It was determined that not only would he have to stop swimming, but he would need a series of surgeries to correct the problem. There was, however, a silver lining. He and his mother were told that swimming was recommended as the best possible therapy.

Kai took that piece of good news to heart, and vowed that he would work even harder in the pool, not just to become a better swimmer, but to beat the disease that had changed his life. And so Kai and his mother began what became an almost monthly pilgrimage to Dallas, Texas, where at the Scottish Rite Hospital for Children, he began treatment under the renowned orthopedic surgeon, Dr. Harry K.W. Kim. Kai's program was not easy, and the aftereffects of his repeated surgeries included nausea and severe pain. He worked through these things, though, and in June of 2016 began practicing again with our local summer league team.

At that point he still could not dive off the blocks, nor even get around on the pool deck without crutches, but he was determined to compete. After a summer of hard work, Kai returned to ABSC, and despite additional surgeries, he continued to improve, always with a smile and seemingly boundless energy. In his most recent trip to Dallas, he was given news that the goal he had worked towards for so long was within reach—he would be cleared to walk in March, just in time for the Northeast Divisional Championships.

Over the course of the past year, Kai could have easily have adopted a negative outlook on life. No doubt many people in his situation would. Yet despite all the adversity he faced, his positive energy and persistence never flagged. He has been an inspiration to teammates and coaches alike.