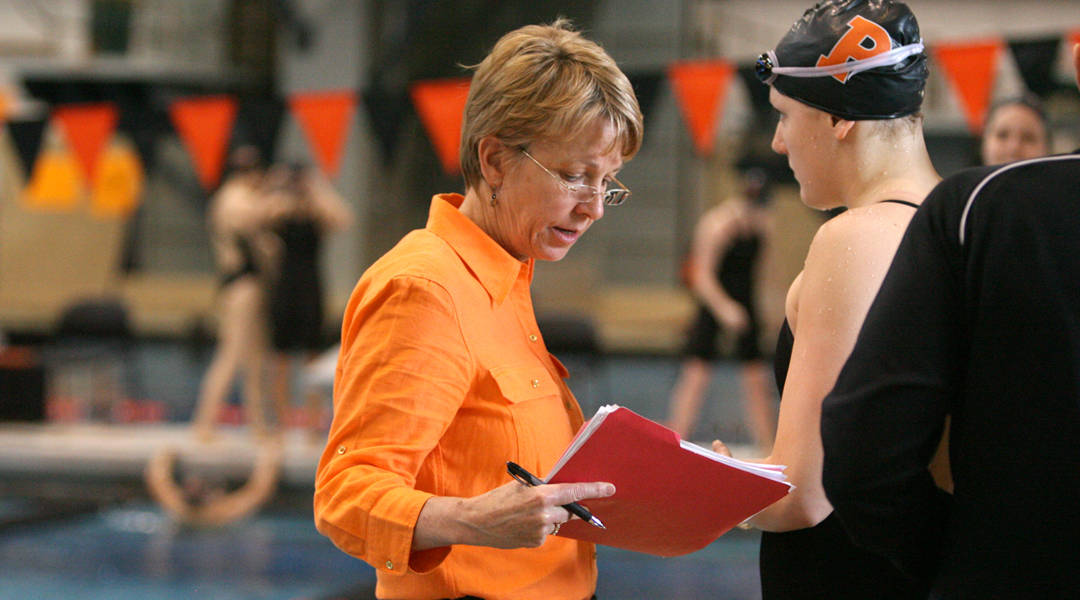 Trident is excited that on October 25th we will have a visit from Susan Teeter long-time womens  swimming coach at Princeton University.  She will be speaking to the Senior Group/High Performance Groups.

Some topics she will discuss

Susan Teeter retired after her 33rd season as the ultra-successful head coach of the Princeton women’s swim team in 2017. Princeton’s all-time leader in wins, Teeter has racked over 219 dual meet victories, and she has guided Princeton to an incredible 17 Ivy League titles. Most recently, Teeter was elected as the President of the College Swimming & Diving Coaches Association by her colleagues and awarded USA Aquatics Sports Most Outstanding Woman for 2015. During a seven-season stretch, her teams won a Princeton-record 47 consecutive meets, a streak that ended in 2004 at nationally-ranked Pittsburgh. Princeton also won five consecutive Ivy League titles during that time period (2000-04). While individual successes have become a regular part of Princeton’s recent dominance, Teeter proudly points to the team successes. Besides her 17 Ivy League championships, Princeton has become a more consistent member of the national Top 25 polls. The Tigers have been fixtures in the polls over the past seasons. Her peers have taken notice of Teeter’s place in the sport. She was honored with the prestigious College Swim Coaches Association “Lifetime Achievement Award” in 2011, and she earned an American Swimming Coaches Award of Excellence four straight years from 2006 through 2009. In 1988 she received the Master Coach Award from the College Swimming Coaches Association for her contributions to collegiate swimming.

Teeter has mentored swimmers who went on to become Olympians, NCAA qualifiers, All-Americas, senior national/Olympic trial qualifiers, World University Games team members and Ivy League champions. Teeter spent the summer of 2000 serving on the U.S.A. Swimming staff at the Summer Olympics in Sydney as an Assistant Manager and the summer of 1996 as the Head Manager of the USA Olympic Swimming Team in Atlanta. In all, she has been on the staff of nine international swim teams. From 2001-2008 she served as a special consultant to Speedo USA for all Olympic and World Championships. In the winter of 2000, Teeter’s senior class established and endowed the Susan S. Teeter Award, which is given annually to the senior class swimmer who, during her four-year career, distinguishes herself as an outstanding student and a valuable member of the women’s swimming team. Teeter has also been honored by past graduating classes by being named an Honorary member of the Princeton Class of 1985 and 1986 Teeter has also been awarded the credentials of Certified Professional Behavioral Analyst by Target Training International, Ltd. and a Certified Professional Values Analyst. She works with college and club teams as well as small businesses to improve the quality of their programs and communication. Through her work with the Target Training materials, Teeter has become known as one of the great TEAM Builders in College Swimming. Teeter is also a Certified Life Coach receiving her certificate from the International Coaching Society. Recently, Teeter was awarded certification as a Tim Elmore “Habitudes Facilitator”. Habitudes is a series of leadership teachings by renowned author, speaker and teacher, Dr. Tim Elmore of “Growing Leaders” in Atlanta, GA. In 1999 Princeton University’s President’s Standing Committee on the Status of Women recognized Teeter for her contributions to women on campus. Teeter is also known for facilitation work while working with women’s growth weekends for the East Coast Sage Circle. Teeter is a graduate of the University of Tennessee, Knoxville graduating with a BFA. She is a level 5 USA Swimming Coach.