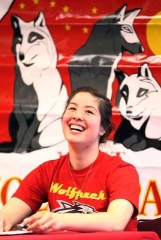 Goering needed to make fast, furious strokes to win the girls 100 and 200-yard freestyles at the state high school meet in Anchorage last November. On Tuesday afternoon in the West Valley library, she needed to make only a few simple strokes with a pen to become a Fighting Illini.

Goering signed a national letter of intent with Illinois of the Big Ten Conference during a ceremony that drew about 43 people, including family members, friends, teammates, coaches, teachers and West Valley administrators.

“They have a really good engineering program, one of the best in the nation, and they were real interested in me from the start,’’ said Goering, who has also received academic scholarships to help pay for her education.

The Illinois swimming coaches were interested, too, and invited the 18-year-old for a visit to the campus in Urbana-Champaign, Ill.

“They became more interested after meeting me and they offered me a scholarship. After that, I pretty much decided that it was just the best fit,’’ Goering said.

The visit was only seven hours, but long enough to convince her to choose Illinois over some other programs which expressed interest — Division III Massachusetts Institute of Technology and D-I schools Pacific, New Mexico, North Carolina State and Georgia Tech.

Fighting Illini head coach Sue Novitsky and associate head coach Steve Farnau also told her that she has an opportunity to contribute immediately as a freshman.

“They’re throwing me into the mix,’’ the 5-foot-9 senior said. “They think I have a lot of potential to grow and get better. So they’re hoping that maybe I can be a leg on the (400 freestyle) relay on the travel team and at the Big Ten Conference meet.”

Goering’s signing marks the third time in 13 months that a girl from the Interior signed with a Division I swimming program.

Lathrop alumna Alyssa Keill signed in April 2009 with New Mexico and she recently completed her first season with Lobos of the Mountain West Conference. Keill will have a teammate from Fairbanks this coming season, as Monroe Catholic senior and valedictorian Lizzy Bennett signed last November with New Mexico.

“This year was the culmination of four years of hard work mentally and physically,’’ said Mitchell, “and she has gotten such mentally stronger than the girl I knew in her freshman year.”

The experience at her last state meet should aid her in collegiate swimming.

“Especially at the Big Ten (conference championships), where you know there’s going to be tons of really good swimmers,’’ Goering said. “Even though there’s going to be swimmers who are going to be Olympic Trials qualifiers and Olympians and that type of thing, I still want to do my best and be able to race the attitude that I have a shot.”