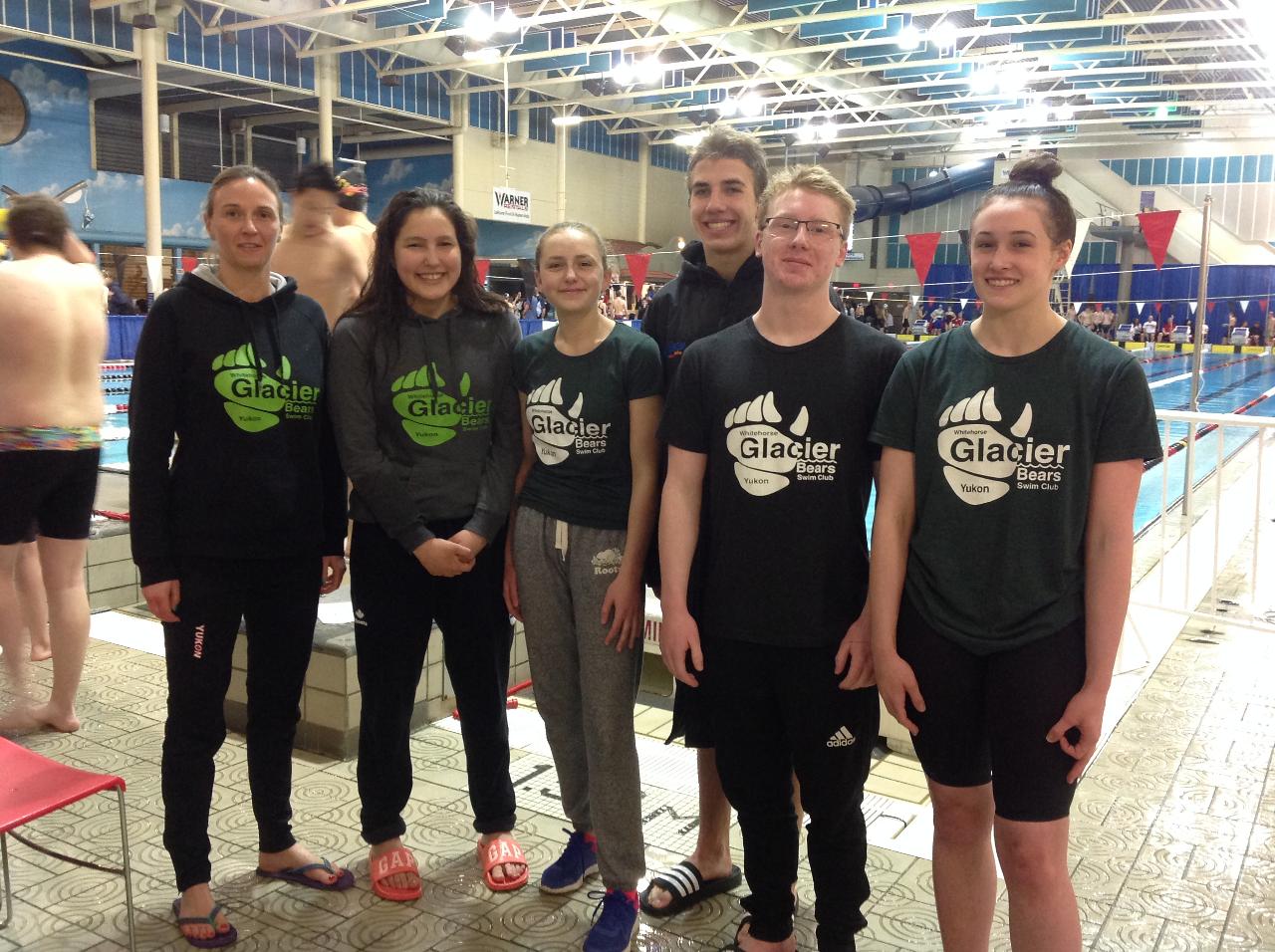 5 Whitehorse swimmers (out of 9 qualified) went to Kamloops to represent Yukon at BC Provincial Championships.

This swim meet was taking place in long course (50meters) pool, which makes it much harder to compete for Yukon swimmers, who never get a chance to train in long course pool.

Other 3 teammates were waiting for the last event of a day, mixed 200 Medley relay. Aidan Harvey, Amelia Barrault, Hannah Kingscote, Alex Petriw swam their best and with time 2:03.63 came in 32nd place out of 59 teams.

Friday morning began with 100 Free. Hannah and Alex swam the best times but it was still far off the final now that they are part of the 16 years and older age category. Kassua went slower than her previous time in 100 Free but she had a very good race in 400 Free afterwards. She went out strong as a leader in her heat and she held strong and even pace. Her last 50m was too slow and Kassua said that she knows she can race it better next time. Unfortunately, Kassua didn't qualify to the final but she probably could, if the last 50m was stronger. Kassua is getting more confidence in racing and she is setting up new goals, for example she wants to extend her abilities and race 1500 Free this season and I know she can be good at it.

Alex and Aidan both improved the old best times in 400 Free LC but again those times were far off competition for finals in this event with being part of an older age category.

In Friday afternoon finals, we had both younger girls in 200 Breast. Amelia swam slower first half of her race than in heats and had much better second half but her total time was 0.76 seconds slower. Amelia said after the race: " I know I could have done it better at the start", she was just holding back a little too much. But it is all a learning process for her. In previous season Amelia just qualified for this level meet for the first time and now she is finishing 200 Breast in 5th position.

Kassua had better race generally. Her stroke looked better than in prelims, her splits were better and her breakouts were better too. She fixed everything what she could from the previous day and swam a little bit faster finishing as 14th.

The rest of the WGB team stayed and watched the youngest girls. It was very good to see them supporting each other.

On Saturday morning Hannah was the first WGB swimmer racing. Her 200 Back wasn't a best time so she ended up placing 19th. Both Alex and Aidan were next racing. Aidan swam slower than his best time and placed 26th and Alex improved a little bit and placed 29th.

No finals for Kassua in 400 IM or Aidan in 200 IM with no improvement in best times.

We had some improvement in personal records in 200 Free but we are far away from the field to count for finals. Amelia finished 39th and both girls Hannah and Kassua finished 42nd in their age category.

Last race of Saturday morning session was 800 Free with Alex who didn't swim his desired time and finished 20th. Alex didn't like his performance in this event, he said it felt hard.

Our the youngest girls qualified to the final in 100 Breast. Amelia finished 7th in A final in the afternoon and Kassua 15th in B final.

Last event of the day was a relay. Hannah, Aidan, Kassua, Alex each swam 50 Free and our team was fighting the best they could and finished 36th. There was nothing more our swimmers could have done as a team to win a higher spot in BC.

No finals for WGB swimmers on Sunday. With few best times swam by Alex in 200 Free and 50 Free and 100 Back, Amelia in 200 IM and Kassua in 200 IM, there was no second swim in the finals. All those athletes swam the fastest they could on that day but there is still a lot of room for improvement. Hannah and Aidan were not able to improve any of their personal best LC times on the last day of BC Provincial Championships.


Below are the results from all events swam by WGB athletes:

Amelia qualified to A final

Kassua qualified to B final

Amelia qualified to A final

Kassua qualified to B final