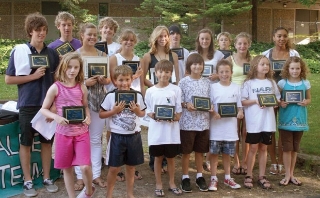 The Napa Valley Swim team recently held its annual awards banquet. All swimmers received specially designed team T-shirts in recognition of their hard work and dedication to the team over the past year.

Elise Roberts, 14, received the Coaches Award, which goes to the swimmer who has gone above and beyond all expectations during the past year and has also exhibited a positive attitude, leadership and coachability.

Jacob Sykes took home the Spirit Award, given to the swimmer who consistently shows the highest degree of team spirit throughout the year.

Iona Pascual received the Michael Plakk Award, given to the most outstanding 8-and-under swimmer based on attitude, swimming ability and coachability. The award is named after a popular and cheerful 5-year-old NVST swimmer who died in a car accident on Dec. 30, 1986.