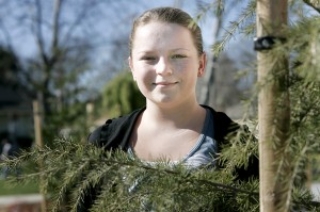 Local teenagers have a friend on Napa’s Parks and Recreation Advisory Commission.

Elyssa Erickson, a 10th-grader at New Technology High School, is this year’s student representative on the seven-member commission, which advises the City Council on parks and public recreation.

Erickson, who has a friendly, easy-going demeanor, assumed her new post last week when the commission talked about pocket parks and where to relocate the downtown skate park.

The skate park’s future is a big deal to students at New Tech, many of whom yearn for more hangout spots to call their own, Erickson said in an interview.

She’s considering sending out an e-mail blast to her peers — an electronic suggestion box, if you will — to get input about priorities for the new skate park and where its future home might be.

Erickson, who wants her classmates’ voices to be heard, said her own personal interests include public access to open space and community pools.

For her first commission meeting, however, she said she decided to hang back and take everything in. “It was more of a listen and learn kind of thing for me,” she said. “I got introduced to the board members and learned about how the process works.”

A Napa native and Kolbe Academy & Trinity Prep graduate, Erickson is also passionate about public access to water sports and affordable swimming lessons. She competes on the Napa Valley Swim Team and plans to swim for Napa High School this spring. Erickson also competed for Napa in water polo and diving last year.

Erickson can never believe it when she meets an adult who can’t swim, her mother, Cymantha Erickson, said.  Elyssa wants to make sure there’s enough public pool space so people can take lessons, she said.

“I think she’s pretty driven,” her mother said. “She’s young for her situation. She started high school at 12 and will graduate at 16.”

The older Erickson, who works for the school district in its maintenance and operations department, said serving on the commission will be a boon to her daughter’s teenage experience. And it can’t hurt to get some city government experience under her belt while advocating for causes she believes in, she said.

“She’s really interested in the outdoors and nature, so it gives her a chance to learn how (those resources) need to be preserved,” she said.

The younger Erickson said her love for the outdoors stems from a history of family camping trips and picnicking in Buhman Park near her Browns Valley Home.

“We do love the outdoors a lot,” the teen said. “Just spending the day outdoors was kind of our thing,” especially during warmer months.

When it comes to her future, Erickson — whose favorite subject is biology — said she hopes to major in animal sciences after graduating high school in two years. She has her eye on Berry College, a private school near Atlanta, Ga. with Oregon State University her second choice.

Polishing her college resume wasn’t the reason she joined the commission, she said.

“To be honest, I normally don’t like to be in the middle of all the action,” she said. “But I decided to take one for the team and go ahead and do it.”

Commission Chairwoman Nadine Wade-Gravett said she expects Erickson to be a boon to commission discussions.

“Aquatics seem to be her (primary) interest and she seems very personable. She didn’t seem afraid to ask questions and to get involved right away,” she said.

Wade-Gravett, who has been on the commission since the late 1980s, said  she has joked, “I’ve been on the Parks and Recreation Commission longer than this student has been alive.”

New Tech principal Howard Mahoney had nothing but praise for Erickson.

“She is an exceptional individual who truly demonstrates the spirit of New Tech. Elyssa is also a strong collaborator who always ads to her group and makes others around her better,” he said.

Erickson will be in action when the commission meets next on March 9 at 7 p.m. in the City Hall Council Chambers.

“The meetings are open to everyone,” Erickson said. “They’re actually pretty interesting.”